Dr. Goodrich served as a Marine officer during the Vietnam War, during which time he decided his next step would be to pursue a medical career. Not only was he an elite surgeon, but over the years he was also a generous mentor and teacher who shared his craft with many young surgeons who wanted to follow in his footsteps.

During the Tet Offensive, he spotted a Vietnamese surgeon in a medical tent opening up a soldier’s head. “Cool,” he thought. “I want to do that” (1). Upon return to the USA, Jim married Judy Loudin on December 27, 1970,  the love of his life who gave him the confidence and support to pursue his dreams.

Dr. Goodrich completed his undergraduate work at the University of California, Irvine and his graduate studies at the School of Arts and Sciences of Columbia University (1972), receiving his Masters and Doctor of Philosophy degrees in 1978 and 1980, respectively. He received his Medical Degree from Columbia University College of Physicians and Surgeons. After an internship at Columbia- Presbyterian Medical Center (1980-1981), he completed his residency training at the Presbyterian Hospital in New York City and the New York Neurological Institute (1981-1986). He also holds the rank of Professor Contralto of Neurological Surgery at the University of Palermo in Palermo, Italy.

He was Director of the Division of Pediatric Neurosurgery at the Children’s Hospital of Montefiore Health System and he served as a Professor of Clinical Neurological Surgery, Pediatrics, Plastic and Reconstructive Surgery at the Albert Einstein College of Medicine since 1998 (2).

Dr. James T. Goodrich dedicated his life to saving children with complex neurological conditions. He had a particular interest in the treatment of craniofacial  abnormalities. He was a pioneer in this field and developed a multi-stage approach for separating craniopagus twins who have their brain and skull conjoined. In 2016, he famously led a team of 40 doctors in a 27-hour procedure to separate the McDonald twins. Throughout his distinguished career, he became known as the world’s leading expert on this lifesaving procedure. He has been consulted on hundreds of cases, and he routinely traveled the world sharing his vast knowledge and expertise with colleagues (3,4).

In Brazil, Dr. Goodrich played a very important role in leading the processes to successfully separate craniopagus sets in Ribeirao Preto (2017-2018), and in Brasilia (2019).

A classical multistage surgery was performed to separate the Ribeirao Preto conjoined twins, and Dr. Goodrich participated on all the neurosurgical procedures as a great mentor. In the final operation, on October 28, 2019, some members of Montefiore Hospital medical staff (Dr. Oren Tepper, plastic surgeon, Dr. Carlene Broderick, pediatric anesthesiologist and Kamilah A. Dowling, nurse) also worked alongside Jim and the Brazilian team.  An extraordinary and humble man, his words after the first surgical step, during an interview for a TV channel, were that in “this particular surgery we were able to do more than we expected because the anatomy was very good and the team had exceptional skills that made the difference”.

Dr. Goodrich was a gentle and truly caring man. He did not crave the limelight and was beloved by his colleagues and staff. He has authored numerous book chapters and articles on Pediatric Neurosurgery and is known worldwide as a prominent lecturer in this field. Outside his work, he was also known for his passion for historical artifacts, travelling, wine, and surfing.

Dr. Goodrich was an incredible human being. In March 30th, 2020, he passed away after complications due to Covid-19 (5). In that day the world has become a little less bright without Jim. Our sympathy and prayers go to his wife Judy, his three sisters, and all those who were close to him 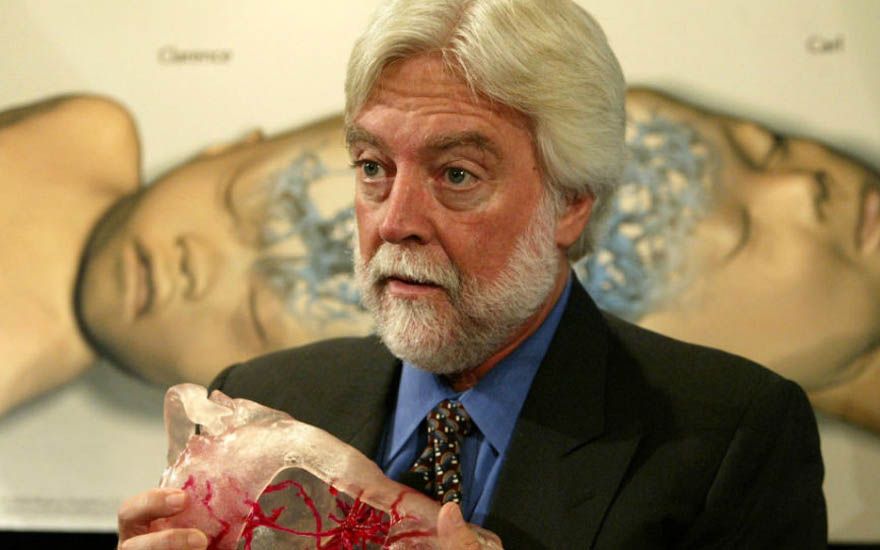 This work is licensed under a Creative Commons Attribution 4.0 International License.

When publishing in Archives of Pediatric Neurosurgery journal, authors retain the copyright of their article and agree to license their work using a Creative Commons Attribution 4.0 International Public License (CC BY 4.0), thereby accepting the terms and conditions of this license (https://creativecommons.org/licenses/by/4.0/legalcode).

The CC BY 4.0 license terms applies to both readers and the publisher and allows them to: share (copy and redistribute in any medium or format) and adapt (remix, transform, and build upon) the article for any purpose, even commercially, provided that appropriate credit is given to the authors and the journal in which the article was published.

Authors grant Archives of Pediatric Neurosurgery the right to first publish the article and identify itself as the original publisher. Under the terms of the CC BY 4.0 license, authors allow the journal to distribute the article in third party databases, as long as its original authors and citation details are identified.

Most read articles by the same author(s)